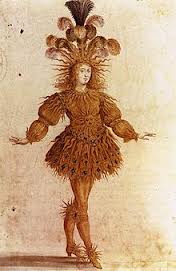 King Louis XIV was known for his incredible dance ensembles and was even known to actually perform in some of his own dances. It was not until he reached his middle age where he discontinued performing in them. But, because of his love for the art, he created the very first ballet school, built for the sole purpose of training professional dancers.The school, Royal Academy of Dancing, was specifically built for the purpose of dancers learning the art of ballet to then later dance in the king's ensembles sometime in the near future.
It was here at this school of ballet where the original forms of ballet were perfected and created. These included the traditional 5 main positions of the feet as well as where the beginner moves such as plies (bends), relives (balancing on toes), and tondus (points) were named. The head dance master who trained the dancers at the Royal Academy of Dancing was Pierre Beauchamp, who is also credited for naming the earliest ballet positions and movements.